Billie Eilish has basically blown up since the release of her debut album When We All Fall Asleep, Where Do We Go?, and acquired a ton of famous fans.

Justin Bieber apparently followed her and Dave Grohl showed up to Ellen to watch her perform after previously comparing the hype around the artist to Nirvana in the ‘90s. Also, Angela Kinsey, who plays Angela in The Office, celebrated the singer’s debut album.

Now, she has a couple of new fans— scene queens themselves Hayley Williams from Paramore and Avril Lavigne.

Eilish posted a photo on her story Sunday of a tweet Williams posted praising her music.

“I am a grown woman losing her shit to this new @billieeilish. How I feel right about neow…” Wililams tweeted.

I am a grown woman losing her shit to this new @billieeilish. How I feel right about neow… pic.twitter.com/6Y2OmbH9UH

Eilish posted a screenshot on Instagram, reasonably losing her mind about the whole thing.

Then, Lavigne followed Eilish on social media, and Eilish posted a video of herself freaking out about it. You can see a screenshot from it below. 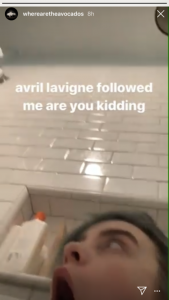 As if her day couldn’t get any better, then, Lavigne tweeted her to congratulate her on the new album.

And Eilish also screenshotted that to put on her story, adding the caption “Wowowowowow what is going on,” which is definitely an appropriate response. We love that she’s losing her mind at getting praise from such badass women in the scene. 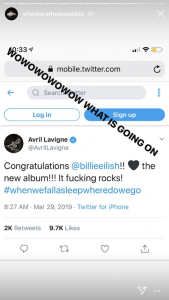 Also recently on Eilish’s story, she posted some adorable photos of her parents taking selfies outside of billboards with her face on it, and it’s almost too cute.

In other news, Eilish blessed us with another weirdly iconic music video for her track “bad guy.” You can watch that below.