Billie, reveals why she still records music in her brother’s bedroom
May 04, 2019  Administrator   Comments are off   News 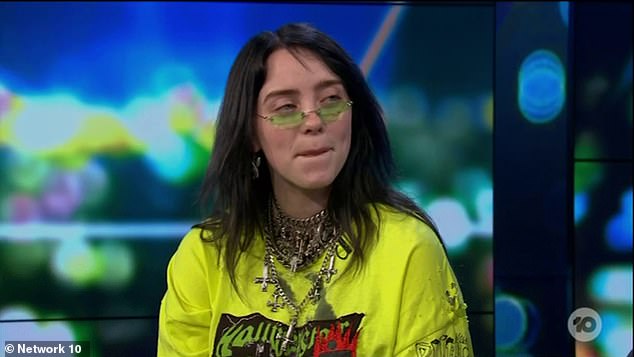 DAILYMAIL: Her debut album ‘When We All Fall Asleep, Where Do We Go?’ has stormed to the top of the charts in 15 countries.
But on Thursday, Billie Eilish revealed to The Project the surprising reason she still records her music in her brother’s bedroom.
Currently on her Australian tour, Billie appeared humble as she said the arrangement was ‘working for them’ creativity.

‘It’s working for us, why change that?’ Billie said, when asked by co-host Waleed Aly why she hasn’t moved her creative process to a professional studio.

Billie’s brother Finneas O’Connell is also a music producer, with the siblings working on a number of songs together.

‘If it’s not broken, why fix it? Coz there’s nothing to fix. You know. We started making music in his room which is nine feet wide in both directions.’

‘It’s worked, and it’s been working. So why not do that. It’s raw and it’s real that we are both completely proud of. That we love.’

The Ocean Eyes singer went on to speak about how fame has affected her, saying she wishes that it had a ‘pause’ button.

Speaking of her newfound fame, she said: ‘I don’t think I would change anything. I just wish their was a way to press a button and it would stop.’

She continued: ‘But then you could press the same button and it would come back, you know. I never want it to go away. I don’t want to change anything.’

She finished: ‘I just want to pause.’

A global sensation, Billie has managed to hit more than one billion streams on Spotify and is regarded as an up-and-coming superstar.

It comes after Billie had a ‘groping’ incident during her Australian tour, following a meet and greet at Sydney’s Hordern Pavilion on Tuesday night.

The teenage sensation took to Instagram to express her discomfort and discuss boundaries after one fan accidentally touched her without consent.

‘Please don’t grap my boobs. [I] keep playing this s*** cool but it is very much not (sic),’ wrote Billie on Wednesday morning, in a now deleted post.

Billie continued: ‘I think what happened last night was just an accident so I acted like I didn’t notice cuz I didn’t wanna make her feel bad if she didn’t mean to do it. But if that s*** was [for real] I’m gone.’

‘Please don’t harass the girl. It was just an accident and not that big a deal. She was very very sweet,’ added Billie.

‘I was just saying in general about certain things that I don’t feel comfortable with. It’s not a big deal.’