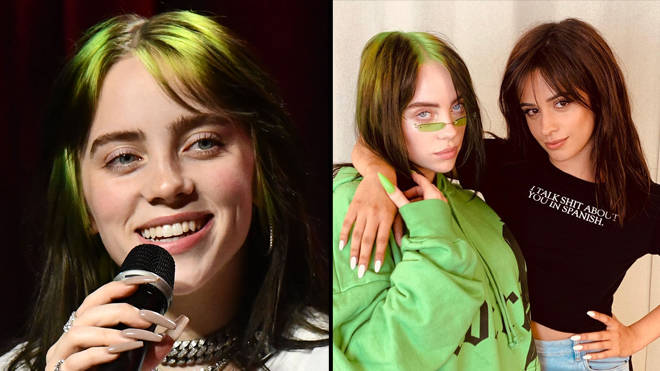 Billie Eilish has finally opened up about meeting Camila Cabello and if we can expect collaboration from them anytime soon.

It’s no secret that Billie Eilish and Camila Cabello are two of the biggest stars in the world right now. In 2019 alone, Billie has scored her first US Number 1 album and US Number 1 single with WHEN WE ALL FALL ASLEEP, WHERE DO WE GO? and ‘bad guy‘ respectively.

Meanwhile, Camila has topped charts all around their world with her Shawn Mendes duet ‘Señorita‘ and launched her new Romance era with two critically acclaimed hits. ‘Liar’ and ‘Shameless’ are the first taste of CC2.

Speaking to ET about the photo of the two artists together, Billie praised Camila’s nose. Billie said: “She has a perfect nose. She really does. She has a great nose.”

Then when asked if the photo means we can expect to hear Billie and Camila on a song together in the near future, Billie quickly shut down any collaboration rumours. “No. She just was there and she was nice. It was a shoot we were doing for Elle magazine.”

Billie then told a hilarious anecdote about meeting Camila’s sister: “We were doing the cover and she was performing and I was gonna be after her and she was super cute, she was with her little sister and her sister started sobbing ’cause of me and it was like insane. I was like your sister’s Camila Cabello though, why are you crying for me, what?”

Camila also spoke about the cute moment in a recent Variety interview: “My sister actually cried when she met Billie Eilish. My sister has never cried meeting anybody. She’s met Taylor [Swift], my sister’s met everybody, and she literally, fully had tears running down her face. She 100 percent likes her more than she likes me.” Iconic.

And, while no Billie and Camila collaborations are in the works right now, Camila has confirmed that she is in the studio with Billie’s brother Finneas working on music for her Romance album.

Speaking about it she said: “He just has this taste, that I think Ed Sheeran or Taylor Swift have, where it’s like he loves the really delicate details of things. Those are the things that really pull his heartstrings.”