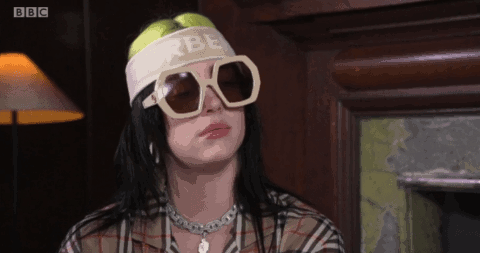 Billie Eilish has talked frankly about how social media trolling is ruining her life and how she’s quit the internet during an interview on BBC Breakfast.

The Bad Guys singer spoke candidly about how nasty social media users have stopped her from interacting with her fans and how she stopped using platforms to engage with them only two days ago.

‘I stopped reading comments full because it was ruining my life,’ Billie said as she sat alongside her brother Finneas, who co-wrote her Bond track No Time To Die.

‘It’s weird, the cooler things you get to do, the more people hate you. It’s crazy.’

‘What do we do about that, how do we make it better?’ asked interviewer Louise Minchin.

‘I don’t know dude,’ Billie replied. ‘Cancel culture is crazy. The internet is just a bunch of trolls. A problem is that a lot of it is really funny. I think that’s the issue, I think that’s why nobody really stops.

‘Also, I would say that it’s anything for a joke. You’d say anything to make people laugh. I’ve experienced that. Growing up, I’d say things that people would laugh at and then later I’d realise that wasn’t cool to say.’

Billie continued: ‘It’s worse, it’s way worse than it’s ever been. It’s insane that I’ve even been reading comments up until this point.

‘I should have stopped long ago. The problem is that I’ve wanted to stay in touch with the fans and keep talking to them, but people have ruined that for me.

‘The internet is ruining my life so I stay off.’

Comments Off on Billie Eilish quits internet as she admits trolls are ‘ruining her life’  /   Share: