At just 18 years old, Billie Eilish has proven herself as a force to be reckoned with in the music industry.

The singer-songwriter rose to fame in 2016 after her debut single, “Ocean Eyes,” went viral on SoundCloud. Since then, she has dominated charts and taken home multiple Grammy Awards.

1).- Eilish is the youngest artist ever to be nominated for all four major Grammy Awards in one year.

At just 17 years old, this made Eilish the youngest artist ever to be nominated for all four major Grammys in the same year.

2).- She then became the second person and only woman in history to sweep all four major categories. 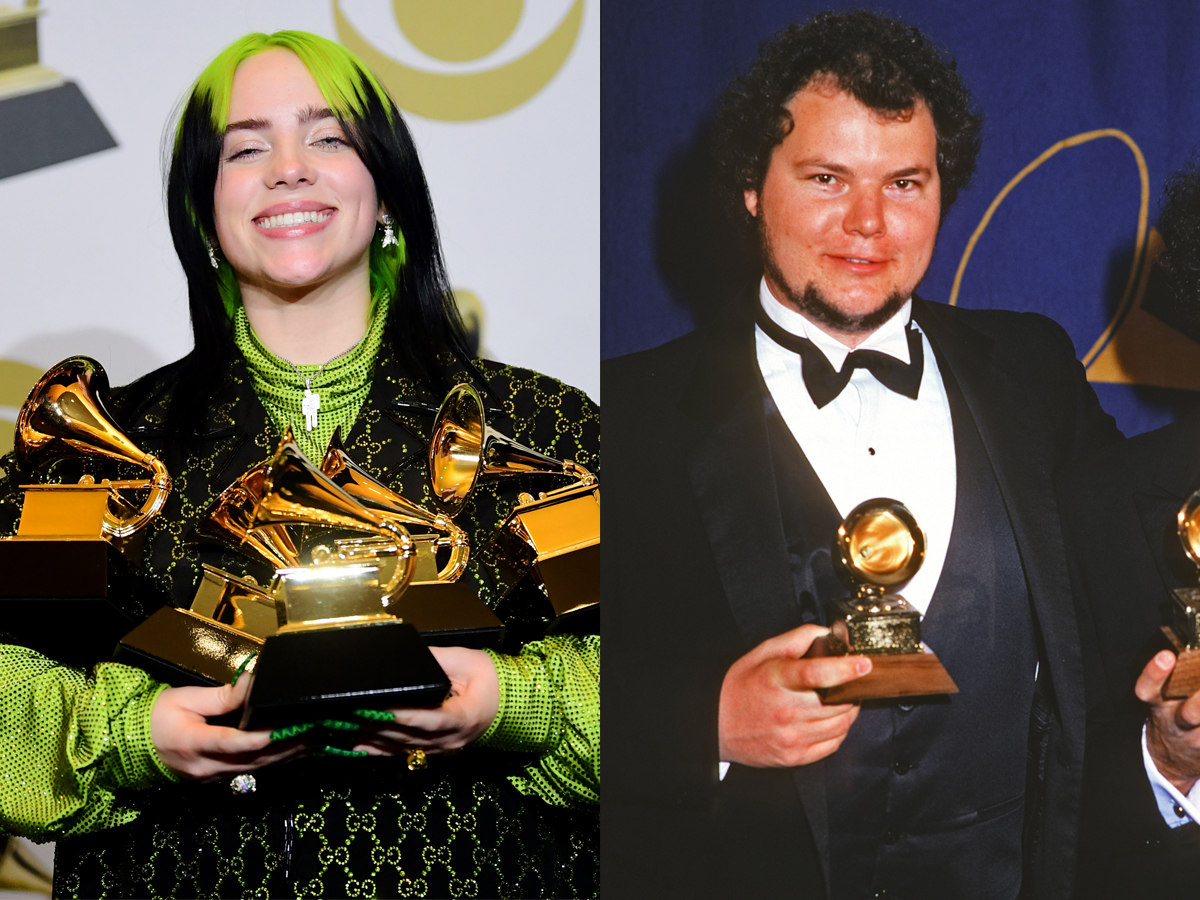 It was just the second time that an artist had pulled off such a feat. The last and only time an artist won all four of these awards was Christopher Cross in 1981. The 29-year-old Texan rocker won big for his self-titled LP – which controversially beat Pink Floyd’s iconic “The Wall” – and for its standout song “Sailing.”

3).- Eilish is the youngest person ever to win album of the year at the Grammys, a title previously held by Taylor Swift. 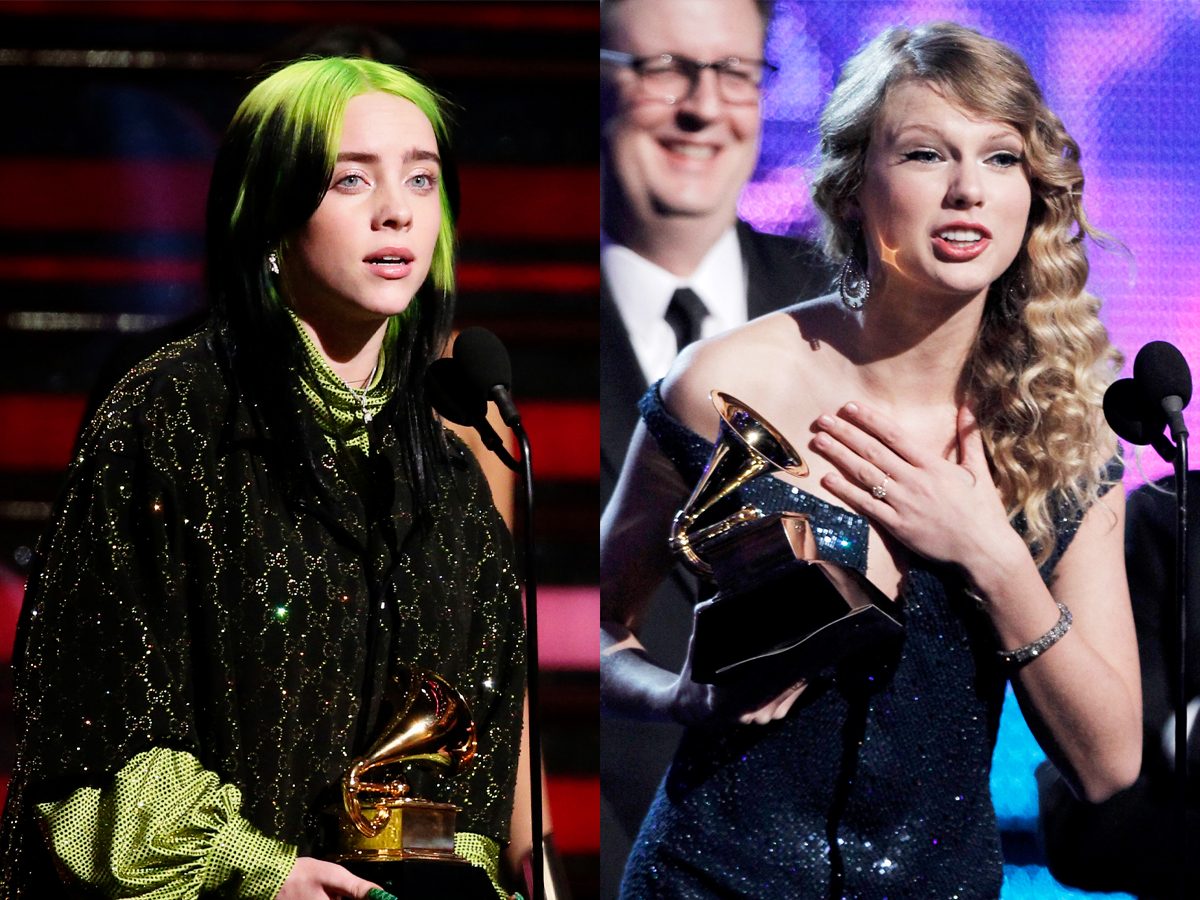 Eilish had recently turned 18 when “When We All Fall Asleep, Where Do We Go?” won best pop vocal album and album of the year at the Grammys.

She broke the record as the youngest solo artist in history to win the ceremony’s most prestigious award. Taylor Swift had previously won for “Fearless” in 2010 when she was 20 years old.

4).- She’s only the fourth female artist ever to win album of the year with a debut album. 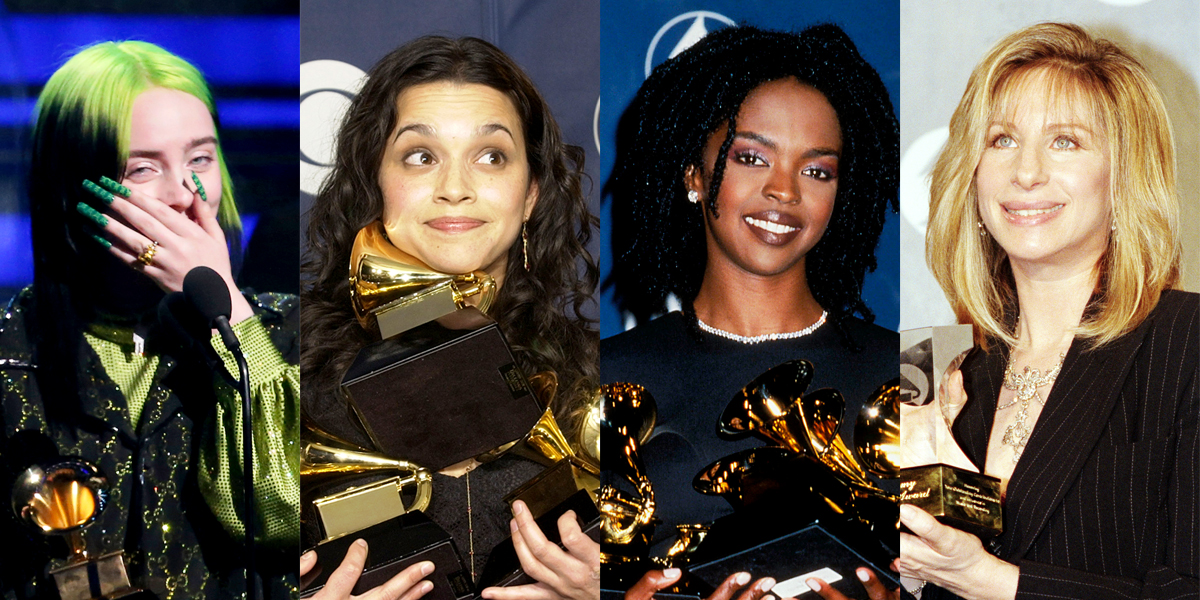 Before Eilish, only three female artists had won album of the year with debut albums.

Barbra Streisand was the first; she won for “The Barbra Streisand Album” in 1964 at the sixth annual Grammy Awards. Next, Lauryn Hill won for her first and only solo album, “The Miseducation of Lauryn Hill,” in 1999; Hill was also the first woman to win five Grammys in one night. Lastly, Norah Jones’ diamond-certified “Come Away with Me” took home the prize in 2003.

Streisand even congratulated Eilish on Twitter, writing, “Welcome to the club.”

Eilish’s first album, released on March 29, 2019, debuted at No. 1 on the Billboard 200. Eilish was born on December 18, 2001, which makes her the first and only artist born this century with a chart-topping album.

6).- With “Bad Guy,” Eilish also became the first person born this century to have a No. 1 hit song.

“Bad Guy,” which dethroned Lil Nas X’s diamond-certified “Old Town Road,” made Eilish the first and only person born this century to have a chart-topping song (Nas, another young star, was born eight months shy of the distinction on April 9, 1999).

Eilish was just 17 when her debut album topped the chart in 2019, making her the youngest female artist to reach No. 1 since 2009, when 16-year-old Demi Lovato released “Here We Go Again.”

For the remaining nine months of the year, Eilish maintained her title as the youngest woman with a No. 1 album for the entire decade.

8).- “When We All Fall Asleep, Where Do We Go?” had the biggest opening week for a debut album in the history of Billboard’s current chart.

With 313,000 units earned, “When We All Fall Asleep” had the biggest opening week for any debut album since Billboard made that transition.

It also became just the seventh album by a female solo artist to move over 300,000 units in its first week. (Its predecessors were Taylor Swift’s “1989,” Adele’s “25,” Beyoncé’s“Lemonade,” Pink’s “Beautiful Trauma,” Swift’s “Reputation,” and Ariana Grande’s “Thank U, Next.”)

9).- It also had the third-biggest streaming week ever for an album by a female artist.

In the first week that “When We All Fall Asleep” was available online, it sold 137,000 albums via streaming alone. According to Billboard, that means the songs were streamed 194 million times during its debut week.

10).- When the album was released, Eilish had more songs charting simultaneously on the Hot 100 than any other woman before that point.

Eilish became the first female artist with 14 songs on Billboard’s Hot 100 at the same time. Twelve out of 14 tracks from “When We All Fall Asleep” – excluding the album’s intro “!!!!!!!” and closer “Goodbye” – joined “Lovely” and “Ocean Eyes” on the chart, earning Eilish a Guinness World Record entry.

Eilish’s record has since been broken by Taylor Swift, who had 18 songs charting simultaneously when the entirety of her 2019 album, “Lover,” made it onto the Hot 100.

11).- It was also named Billboard’s biggest album of the year, making Eilish the youngest artist ever to have the year-end No. 1 album.

Billboard dubbed “When We All Fall Asleep” the “biggest album of the year” on December 5, 2019, when Eilish was still 17 years old. Eilish, who was also named Billboard’s 2019 Woman of the Year, became the youngest artist to earn the honour and the only teenager ever.

Rolling Stone also named “When We All Fall Asleep” the best-selling album of 2019.

12).- With “Everything I Wanted,” she tied the record for the most No. 1 songs by a solo artist on Billboard’s alternative songs chart.

Eilish’s single “Everything I Wanted” ascended to the top spot on Billboard’s alternative songs chart in February 2020. It became her third No. 1 on the chart, following “Bury a Friend” and “Bad Guy,” tying the record for a solo artist.

Eilish joined Beck and Alanis Morissette as the only artists with three No. 1 hits on Billboard’s alternative songs chart.

In February, Eilish logged her 10th week at No. 1 on the Billboard Artist 100 chart.

14).- She is the youngest artist ever to record a James Bond theme song.

Eilish was tapped to sing the theme for the upcoming James Bond film, “No Time to Die,” making her the youngest artist ever to create a song for the legendary spy films.

She wrote the haunting ballad, also called “No Time to Die,” alongside her older brother and producer, Finneas O’Connell.

Comments Off on 14 records Billie Eilish has already broken  /   Share: