Happier Than Ever
September 01, 2021  Administrator   Comments are off 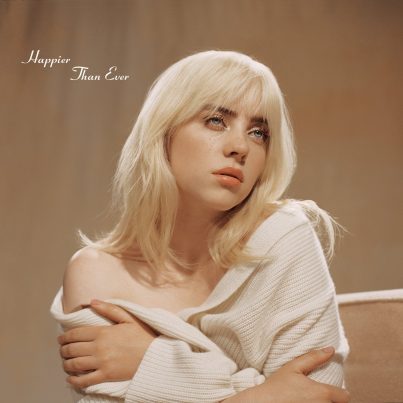 Happier Than Ever is the second studio album by American singer Billie Eilish. It was released on July 30, 2021, by Darkroom and Interscope Records. Eilish wrote the album with her frequent collaborator, her brother Finneas O’Connell, who produced the album himself. Eilish cited self-reflection during the COVID-19 pandemic as the biggest inspiration for the record.

Primarily a downtempo pop record, Happier Than Ever is characterized by sparse, jazz-influenced, electropop arrangements set to meditative tempos, departing from the upbeat, trap-led sound of Eilish’s debut studio album, When We All Fall Asleep, Where Do We Go? (2019). Consisting of torch songs about the downsides of stardom, Happier Than Ever draws heavily from Eilish’s rise to fame and the drawbacks that come with it. Upon release, the album collected acclaim from music critics, who underscored its stylistic, restrained production, and insightful lyrics.

Six singles were released in promotion of the album: “My Future”, “Therefore I Am”, “Your Power”, “Lost Cause”, “NDA”, and the title track, all of which charted in the top 40 of the US Billboard Hot 100; “Therefore I Am” was the highest-charting song from the album, peaking at number two, followed by “My Future” at number 6, and “Your Power” at number 10. Happier Than Ever debuted atop the Billboard 200 as Eilish’s second number-one album in the United States, and topped the charts in 20 other countries. To promote the album further, a Disney+ documentary concert film, Happier Than Ever: A Love Letter to Los Angeles, will be released on September 3, 2021, and Eilish will embark on her fifth concert tour, titled Happier Than Ever The World Tour, set to cover Europe and North America in 2022.

Touring
On May 21, 2021, Eilish announced that she will embark on her fifth concert tour, Happier Than Ever The World Tour, to promote the album. The tour covers Europe and North America, starting in New Orleans on February 3, 2022. The tickets went for sale on May 28, 2021.[52]

Promotion & Release
Happier Than Ever was preceded by five singles, all of which charted inside the top 40 of the US Billboard Hot 100 chart: “My Future”, “Therefore I Am”, “Your Power”, “Lost Cause”, and “NDA”, the first of which was released exactly a year ahead of the album’s release.[51]

The album was released on July 30, 2021. It was available in a variety of physical album formats, such as eight differently colored vinyl LPs, including retail-exclusives for Amazon, independent record stores, Target, Urban Outfitters and Walmart, ten CD variants, including autographed CDs at independent stores, a version with alternate packaging hand-painted by Eilish, three premium box sets, a Target-exclusive edition packaged with a poster, and multiple cassette tape variants, including a deluxe box set. On July 22, Eilish revealed the September 3 release of a concert film on Disney+ titled Happier Than Ever: A Love Letter To Los Angeles, directed by Robert Rodriguez and Patrick Osborne. To support the album in the United Kingdom, a television special titled Billie Eilish: Up Close was broadcast on BBC One on July 31, in tandem with Eilish’s debut on the BBC Live Lounge. On August 9, Eilish performed the title track on The Tonight Show with Jimmy Fallon.